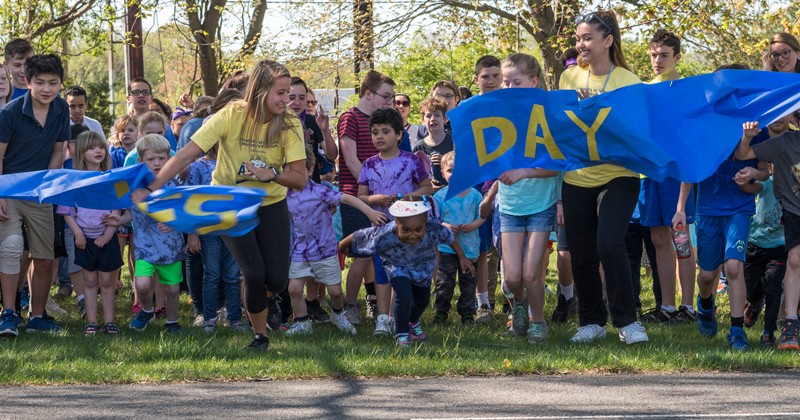 Did you know there is an international event to help kids get their wiggles out?

Every year on the first Wednesday of May, millions of children across the world participate in Project ACES, which stands for All Children Exercise Simultaneously. The idea is simple: amid the rising tide of childhood obesity, communities can promote physical fitness and healthy habits by hosting activities that get kids moving.

At the University of Delaware, ACES Day has for the past 15 years been organized by undergraduate juniors and seniors interning at The College School and The Lab School, both located on the University of Delaware’s Children’s Campus and both part of the College of Education and Human Development. With planning for the project beginning each February, interns have collaborated with UD Athletics — including in recent years with the football, basketball, field hockey and lacrosse teams — to design physical activities that are fun for the younger children at The Lab School, who range in age from six months to six years, as well as for the older kids at The College School, which enrolls children first through eighth grade. The challenge each year is to strike the right balance of activities that will appeal to children of all ages, which is exactly the kind of problem-based learning that makes UD internships so valuable.

“It’s a great opportunity to build our campus community and showcase the contributions of our undergraduates, and it’s also a lot of fun,” said Laura Dougherty, director of The College School, adding that ACES Day typically attracted close to 200 participants each year.

This year, however, things didn’t go as planned, and the undergraduate interns organizing ACES Day were confronted with an unusual challenge: how to promote exercise and physical activity virtually, while children were home because schools were closed because of the coronavirus (COVID-19) pandemic.

“Despite the COVID-19 pandemic presenting with unexpected circumstances, these students improvised and created a virtual platform to keep this annual tradition going,” said Dorit Radnai-Griffin, director of The Lab School. “Our children, families and staff applaud their tireless efforts to get everyone up and moving. This is another powerful example of the unique experiences our undergraduate interns bring to UD’s Children’s Campus.”

So how do you plan such a project when families are home?

“When everything moved online, we were really determined to still make it an event, even though it was going to be very different,” said Sydney Hirsch, who interned at The College School and graduated in spring 2020 with a degree in health behavior science, which concerns the ways in which individual, social and environmental factors influence health and physical fitness. Hirsch is one of three Health Behavior Science interns who has since been accepted into a nationally-ranked graduate program in occupational therapy. “We had to transform this from an in-person event to a virtual event while still incorporating the main objectives of ACES Day.”

As the interns started planning for the event, they quickly realized that many of the activities were simply not possible for children sitting in front of a computer. So the interns created an ideal blend of activities that would engage all age groups in attendance.

“We tried to figure out how to modify some of the physical activities,” said Melissa Rosales, who interned at The Lab School and graduated in spring 2020 with a degree in human services. She has since been accepted to a nationally-ranked graduate program in social work. “We also had to consider which activities were feasible for all involved because of the age difference between The Lab School and The College School children.”

ACES Day went through many transformations as the undergraduate interns sought to strike the right balance. They had considered hosting multiple Zoom activity sessions throughout the day, but they were also concerned about too much screen time. Another idea was to ask families to film certain activities and share them on social media. The undergraduate intern team for the College School included health behavior science majors Hirsch, Hannah Gottfried and Liz Clayton; The Lab School team included human services majors Rosales, Leah Krauskopf, Joy Kim and Blair Melcher.

Ultimately, they decided on an abbreviated group activity session via Zoom, followed by a “checklist” of activities that could be completed independently throughout the day. Meanwhile, the older children at The College School were grouped with a younger “buddy” from The Lab School to promote engagement across age groups.

“We didn’t want students to be active for just the 45 minutes we were together virtually,” said Hirsch. “We wanted them to be active for the whole day, or a couple of days, so we created a checklist with different challenges — like doing a cartwheel or somersault, or holding a plank for as long as you can — to keep children engaged for as long as possible.”

Rosales and her roommate, Hannah Gottfried, who also graduated in the spring with a degree in health behavior science, hosted an online yoga session and dance party attended by more than one hundred and fifty participants including students, teachers, UD interns, parents, and siblings.

“Despite the pandemic, ACES Day reminds us how vital physical activity is to childhood development, especially under the current circumstances,” said Hirsch. “Sometimes, the best thing for children to do is get moving.”

Read the full article in UDaily